Empire Subang is a mixed commercial development located in the city centre of Subang Jaya at SS16. It is a combination of Empire Hotel, Empire SOHO (small offices), Empire Tower (office suites), and Empire Shopping Gallery (retail mall), sprawling over 3.8 acres freehold commercial land. Empire Subang boasts the concept of live, work, shop, dine and wine under one roof. There is a private club located on the eighth floor of the SOHO block that hosts sky bar lounges, swimming pools, alfresco cafes and restaurants. However, the club is strictly for members and hotel guests only. Empire SOHO comprises 240 SOHO units with 30 units per floor. The duplex loft consists of dining area and living area and kitchen for the 538 sf lower floor, and a 255 sf upper deck for bedroom. The living and dining area has a double volume height. What makes it an office? Well, one can actually opt to transform the dining and living area into an office and use the upper deck as a bedroom. Empire Hotel was also open for purchase and investment. The launch price was from RM280,000, which was fully furnished and to be rented back to the developer who will run the hotel. It was a guaranteed rental yield at 7% for the first 5 years after completion. It was a 5 + 5 year lease. On the other hand, Empire Shopping Gallery is an upscale retail mall comprising 180 units of exclusive retail lots. In the mall, there are many internationally renowned restaurants, cafes and shopping outlets.Empire Subang is accessible via Federal Highway, Damasara - Puchong Expressway (LDP), New Klang Valley Expressway (NKVE) and Subang - Kelana Link. For public transportation, it is served by Subang Jaya KTM Komuter station and several bus stations. An LRT station will be built next to the KTM station by 2015.

Empire Subang is one of the most sought after commercial developments in the Klang Valley. It is situated in one of the most vibrant and affluent area of Subang Jaya. It is surrounded by many high-rise apartments like Saujana Residency, Subang Olives, Subang Avenue, Casa Tiara, e-Tiara and Isola. However, some speculate that the Kelana Jaya LRT extension line is going to cut straight across next to Empire Subang. Thus, making it really a big turnoff for those purchasing this property for residential purposes, as the noise from LRT and KTM trains could be unbearable at times. The good news is, those who invest for commercial reason will cheer for the added convenience of public transportation. Ever since its completion, the sub-sale prices have tripled as of 2014.Undoubtedly, Empire Subang is a prominent landmark of Subang Jaya. Its unique concept is the talk of the town for years now. Most of nowadays modern developments are just 2-in-1 or 3-in-1 which comprise service apartments, shopping malls and office towers. Now, Empire Subang comes out with 4-in-1 development, with the hotel. The developer of Empire Subang, Mammoth Empire Group, has proven its potential after some exclusive successful projects such as The Ara and The Loft.Unfortunately, there was a period when Empire Subang was off-limits to the public due to an explosion that occurred on the 28th September 2011. During the incident, all occupants were evacuated while investigations were being conducted for a month. It was reported that the explosion was due to a leaking gas pipe at a restaurant located in the lower ground floor of the upscale retail mall. 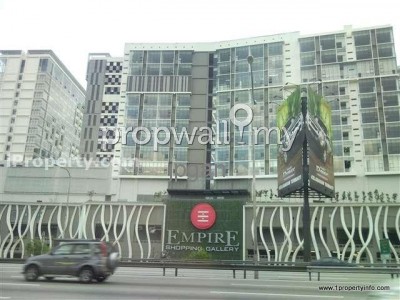