Top Glove Tower is a commercial development in Setia Alam, Shah Alam, Selangor. It is currently being built on a land that was purchased by Top Glove Corporation Berhad from SP Setia Berhad. This project is being developed by SP Setia Berhad and it is slated for completion by March 2015.Top Glove Tower will consist of one block of 23-storey tower with numerous freehold commercial units. Out of the 23 floors, 14 floors will be dedicated for offices and two floors will be for retails, whereby the offices will have built-up areas of 17,319 sf and the retails will have built-up areas ranging from 753 to 12,002 sf. The facade of the tower will feature double-glazed windows with low emission coating for heat insulation and optimum interior light.The building of Top Glove Tower is being built as a certified Green Building Index (GBI) so it will feature photovoltaic panels that can harness solar energy. Great tower will have great facilities, thus Top Glove Tower will offer many facilities to its tenants such as a 7-storey car parks with a total of 728 bays, six passenger lifts, 1 service lift, 2 escalators and 2 passenger lifts at the car park levels.Furthermore, there will also be other facilities at Top Glove Tower such as banks, multipurpose hall, cafeteria, restaurants, gymnasium, fitness centre and badminton courts. For security purposes, Top Glove Tower will be protected with access card control system, 24 hour electronic surveillance, centralized monitoring and CCTV coverage in common areas, car park as well as lift lobby.Top Glove Tower will never be lack of amenities as it is close to many public amenities as well as services. These amenities include banks, shopping mall, hypermarkets, convention center, mosque, temple, surau, clinics, various F&B outlets and fitness centers. It is also only mere minutes kilometers away from Jalan Duta toll, Damansara toll, Subang toll, Bukit Raja toll and Port Klang. Conveniently situated just adjacent to Setia City Mall, Top Glove Tower has an easy access to many major routes and highways which include NKVE Highway, ELITE Highway, Shah Alam - Puncak Alam Highway, New North Klang Straits Bypass, Shapadu Highway, Federal Highway, KESAS Highway and Jalan Meru. Top Glove Tower is also situated near a public transportation hub.

Top Glove Tower is being built by a prominent developer in Setia Alam, which is one of most prestigious addresses in Shah Alam, Selangor. The tower is actually being built by SP Setia Berhad in conjunction with Top Glove Corporation Berhad in order to built a new headquarter for the Top Glove company. Aside from the headquarter, there will also be retail and office spaces available for rental.The units at Top Glove Tower have been reasonably priced with rental price starting from RM3 psf. Considering the great location, nearby many established neighbourhood and many amenities, Top Glove Tower can house many companies that are looking for a new, yet well-known area to allocates their new offices.Businesses that are renting the retail units at Top Glove Tower will also benefit from the offices that is deemed to be fully-occupied at Top Glove Tower. The retails can expect customers from those who are working at the tower and also from outsider visitors. It is expected that retails will definitely earned profitable income from being at Top Glove Tower. 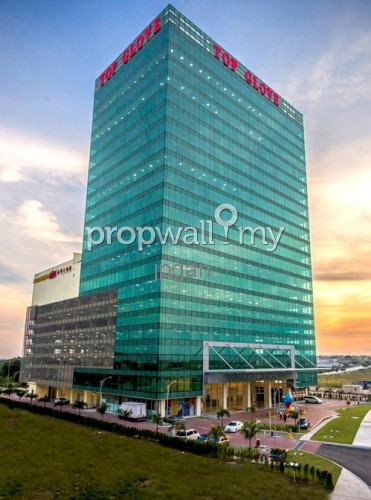