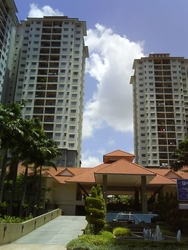 Kelana Mahkota (also known as Kelana Mahkota Condominium) is a middle-class condominium located within the SS7 enclave in Kelana Jaya. This condo which was completed in early 2005 is a 99 years leasehold project. It has three blocks of 23-storey units consisting 712 units of standard and duplex layouts built on 6.63 acres of land.Kelana Mahkota is equipped with excellent facilities such as a wading and swimming pool, gym, tennis, squash and badminton courts, a convenience shop, a cafeteria, BBQ area, podium and basement car park and many others to complement the property owners lifestyles. Apart from that, this condo is also close to public amenities such as shopping malls (Giant, Tropicana City Mall), schools (SJK Kelana Jaya and SMK Kelana Jaya), hospital (Kelana Jaya Medical Centre), Kelana Jaya LRT station and many others. This beautifully landscaped and well maintained condo is also easily accessible via Lebuhraya Damansara Puchong (LDP), New Klang Valley Expressway (NKVE) and Federal Highway.

Kelana Mahkota may be easily accessible via major network of highways, but the condo might be located too near to the highways, particularly the New Klang Valley Expressway (NKVE) which is exactly next to / behind this condo. Thus, pollution would definitely be an issue, particularly to those with small children. As there are more and more people (students and working adults) renting either a room or the whole unit at Kelana Mahkota. The limited car park space has forced some of the tenants to park their cars along the road side. However, ever since a number of car break-in cases were reported, there are lesser and lesser cars parked along the road side now. Some have resorted to parking at private empty spaces where they have to pay approximately RM80 each month. Furthermore, police officers would also frequently inspect the surrounding areas and would even summon those who parked their cars along the road side to ensure that they do not block the public bus route. As for a unit at Kelana Mahkota itself, it is rather spacious except for the small "budget" room for the 1,260 sf unit. Other than that, some property owners have also complained of low water pressure issue, which has been highlighted to the property management. Apart from that, the lower ground and podium parking were also flooded at times especially after heavy downpour. However, there should be compliments on the peaceful and quiet surroundings at this condo. The facilities are also well maintained and the whole condo is clean and still looks new even though it is already 4 years old. Kelana Mahkota is a good catch as there has been a steady demand on potential tenants wanting to rent a unit at this condo. Furthermore, the condo's location is already a plus factor itself, which could possibly provide stable rental returns to property investors. Nevertheless, it is probably a waste that this is a leasehold project. Perhaps there could be a high possibility of this property's tenure being changed or rather upgraded into a freehold status as another nearby condo had its status had successfully changed recently.