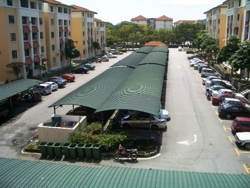 SD Apartment II (also known as SD Apartment 2) is located across from SD Apartment I divided by Persiaran Meranti. Stretched over 20 blocks and over 700 units, it was developed on freehold land. Situated in the developing township of decade-old Bandar Sri Damansara, which is developed by Land and General, SD Apartment II is the second phase of apartments to be developed over ten years ago. SD Tiara and Sri Meranti surround the property on both sides in a high-density area.There are many amenities that surround SD Apartment II. Shell & Mobil petrol stations, fast food restaurants, mamaks, banks, convenience shops, and much more that are within walking distance to the property. SD Apartment II is also right next to forest reserve land. As such, lots of greenery and clean fresh air surrounds the property. There are low and medium cost units in the property. The low cost units range about 639 – 758 sf and come with only one bathroom. The medium range units are about 780 – 805 sf in built up and have two bathrooms. This high density development has over 700 units stretched over 4 and 5 storey blocks. Most of the ground floor units are shop-offices or retail outlets like salons and mini markets to service the residents there.

SD Apartment II is located in a developing township and infrastructure is in place to provide many amenities. There are many schools, both public and private institutions, primary and secondary schools, kindergartens and child care centers located within walking distance. F&B outlets and other useful amenities at the shop-offices nearby provide other useful services as well. And just a few minutes drive away is neighboring township, Bandar Menjalara where you can find the Tesco hypermarket, Desa ParkCity's Aeon Jusco supermarket, in Kepong the Jaya Jusco shopping mall and slightly further away the Golden Triangle of PJ, Mutiara Damansara where more shopping malls like IKEA, IPC and The Curve are located. SD Apartment II is easily accessible via the LDP, MRR2, DUKE and Sungai Buloh Expressway and links commuters to Kepong, Sungai Buloh, and even Putrajaya. SD Apartment II itself is very heavily populated, not to mention the surrounding low – medium cost housing as well. Nonetheless, Land and General's plans to further develop the township will soon include high-end properties like 8trium office towers and D'sara Villas exclusive bungalows to uplift the value of property in Bandar Sri Damansara and give residents a choice of luxury living and commerce in this developing township. 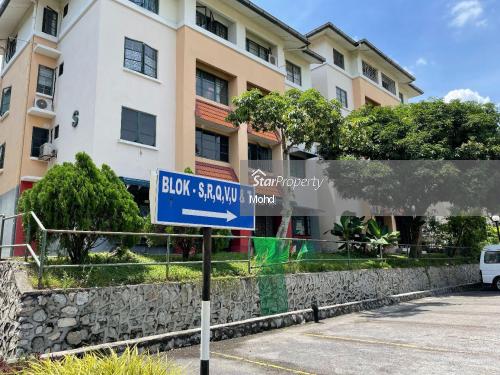