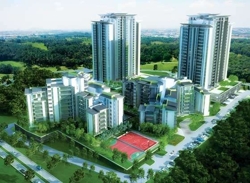 Serin Residency is a low density condominium nestled in Cyberjaya. It neighbors Symphony Hills, Garden Residence, Cyberia Crescent 1 and Symphony Park. Sited on a large 10-acre of freehold land, it only consists of 600 units which are sprawling over from blocks. It offers various built-ups ranging from 965 sf to 3,527 sf. Limited units at Serin Residency come with private garden and 6-panel glass sliding doors. Each unit is built with full-corner L-shape windows to allow natural lighting as well as enable residents to enjoy the panoramic surrounding views. Plus, each unit comes with 2 car park bays. Among its distinctive features is its 3.7 acres of landscaped greenery completed with meditation decks and wooden gazebos. Adding to that, there are observation decks from tower rooftops. There are 3 swimming pools provided; family pool, wading pool and lap pool. In addition, full condominium facilities are provided including badminton court, basketball court, lap pool, family pool, wading pool, jacuzzi, futsal court, gymnasium and sauna. Serin Residency is just a stone's throw away from Street Mall, Cyberjaya Transport Terminal (CTT), Cyberjaya Lake Garden, Cyberjaya Mosque and Multimedia University (MMU). Besides that, there are a few schools nearby, namely ELC International School, SK Cyberjaya and SMK Cyberjaya. It is also near to NeoCyber and several prominent buildings such as LHDN HQ, HP Global Centre, CBD Perdana 2 and Bank Negara Malaysia Data Centre. Serin Residency can be easily accessible via Persiaran Bestari and Persiaran Multimedia which is linked to Maju Expressway, B15 Expressway and Elite Highway.

Villamas Group is an experienced developer with a handful of developments in its pocket. Most of the developments are landed houses such as Melaka Perdana, Taman Melaka Perdana and Bukit Kepong Baru. The developer's latest products are Villa Park which is just completed and Atmosfera which is still under construction. Even though there are a bunch of new residential developments coming up in Cyberjaya, Serin Residency is believed to have several competitive edges than the rest. Despite targeting students, it is suitable for new and young families who is working around the area. It is just within walking distance to HP Global Centre, and minutes of cycling to Dell and DHL. Adding to that, Serin Residency offers larger built-ups and two car parks per unit. There is no LRT station in Cyberjaya currently. You can get the nearest railway station from Putrajaya Sentral. It is located 5km distance from Cyberjaya. You may have to take ERL train go to KLIA and KL Sentral. There are many bus route in Putrajaya Sentral. They are including access to Bangi, Kajang and Pasar Seni. There is an abandoned LRT project in Putrajaya Sentral which can be linked inside to Cyberjaya more than 10 years. If the project is resumed, Cyberjaya could become one of the most happening area with the tag of the "Silicon Valley of South East Asia".Most of the new development condominium in Cyberjaya are average selling RM400 psf++ in 2011/2012. If you are lucky lock a unit which selling RM280 psf, You are one of the lucky man in Cyberjaya. It can be seen that Cyberjaya has been changed a lot from the past 5 years. Previously, here is a closed community, not many developers can gain the privilege to get a land over here. The major landowner here are Setia Haruman, MK Land and Putrajaya Holdings. Rumors said that is related the local political issues until it is open for other developers in 2010.The main factors to leverage people reside in Cyberjaya is "MEX Highway". It is completed in 2008. MEX highway is a highway that directly link from Putrajaya to Jalan Tun Razak. The increasing of this highway is very significance from years to years. If you are getting bored with the KLCC view, perhaps try to get a Cyberjaya and Putrajaya lake view and bridge view is not a bad option. 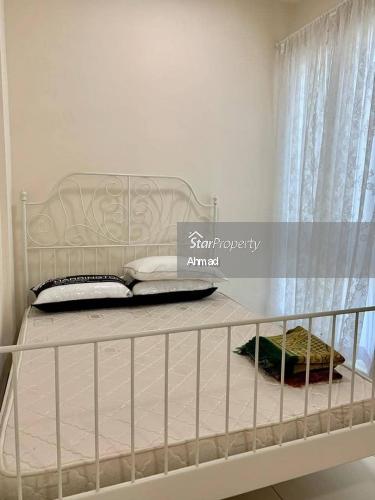