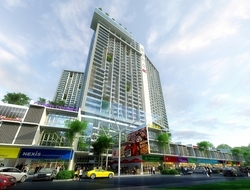 CyberSquare is a mixed development located in Cyberjaya, Malaysia's Silicon Valley. This project by Binastra Group comes with 4 blocks which includes SoHo, office suites and retail outlets. The entire project is built on a 6.95-acre land with a total of 1,424 units. Scheduled for completion by 2017, this SoHo units were launched at RM252,000, with a maintenance fee of RM0.35 psf. As of November 2013, only the two SoHo towers at CyberSquare; namely Apex Tower and Vertex Tower, have been launched. The remaining two office towers and the retail outlets would be launched later on. The two SoHo towers comes with 37 storeys and 38 storeys each, while both office towers comes with 6 storey respectively. The SoHo units come in 2 types of layouts. Type A is a studio unit with 1 bath and 450 sf built-ups, while, Type B is a 2 bedroom and 2 bathroom unit with a built-up of 775 sf. Also included in this CyberSquare development are state of the art facilities, among them being a swimming pool, wading pool, jacuzzi, gymnasium, basketball court, futsal court, function room, game room, library, meeting room, surau, sauna room, pool deck, yoga deck, playground, barbecue area, cabanas, reflexology park, meditation garden, laundry room and serene water features. After the completion of the retail outlets, more conveniences within walking distance will be available to the tenants.In term of accessibility, CyberSquare are linked by four major highways namely KL - Putrajaya Highway, North - South Expressway, North Klang Valley Expressway (NKVE) and Damansara - Puchong Expressway (LDP). Amenities namely UNITEN, LLM, UPM, MDeC, MCMC, Telekom IT Complex, Lim Kok Wing University, Alice Smith International School, Alamanda Shopping Mall, Mines Shopping Mall, Mines Resort City, Smart School 1 and 2, Multimedia University, Cyberview Lodge Resort, Selangor Turf Club and Country Heights, Century Square and Cyberjaya Terminal are also located within the vicinity.

CyberSquare is developed by Binastra Group, a firm which begin as a construction company in the year 1979 and ventured into property development in the year 2005. So far, the firm had developed Green Terrain, Seri Titiwangsa, Taman Kinrara, Megah 18, Prestij 16, 32 Avenue, Green Residence and The Hills. CyberSquare is a well planned mixed development situated in a strategic location near to numerous amenities. The entire two blocks were fully booked when this project was launched which obviously show that the investors sees the potential of this property.CyberSquare is considered to be affordable due to it's lower price which is RM500 psf. Meanwhile, other properties in the surrounding such as Pan'gaea are priced above RM600 psf. But it is vital to note that these SoHo units have very small built-ups and the biggest built-up itself is just 775 sf. It would be acceptable for rental or for couples, yet it will not be suitable for big families to stay. Besides, most investors would go for this property just for its close location to education institutes, government offices and private companies.