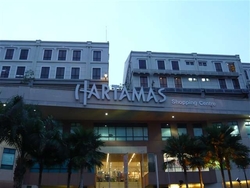 Plaza Damas is a mixed development commercial center in Sri Hartamas. This freehold development was developed by Mayland, one of the more established developers in the Klang Valley. It consists of retail shops, offices and 4 serviced apartment towers, which are named Dorchester, Mayfair, Waldorf Tower and Windsor Tower. At the heart of the Plaza Damas commercial center is the Hartamas Shopping Centre that houses over 70 eateries and a whopping 200 retail stores within its premises. With big names like TGIF, Starbucks and Pasta Zanmai, Plaza Damas caters more towards the mid to high income group and the Japanese and Korean community who live within the Sri Hartamas and Mont Kiara areas. Recently, the Taylor's Education Group has also set up their campus within Plaza Damas to cater to students from surrounding areas of Bangsar, Damansara Heights, Hartamas and Kenny Hills. With the opening of this new campus, the visitor mix in Plaza Damas has been greatly diversified. Immediately surrounding Plaza Damas are the new Royal Palace which is to be the residence of the Yang Dipertuan Agong of Malaysia and the Kenny Heights exclusive private town villas and the new Plaza Damas 3 development. With its strategic location, Plaza Damas provides quick access to some of the major highways within the Klang Valley and is easily accessible through the SPRINT highway, Penchala Link,Kerinchi Link, the NKVE, Jalan Duta and Jalan Kuching. From its location, the IKANO Power Centre, IKEA, The Curve, Cineleisure and Damansara Perdana area is a mere 5 minute drive via the Penchala Link while the Phileo Damansara Business Center which is home to the offices of The Star Group and Siemens, is only a 10 minute drive away.

Plaza Damas in an unpolished gem in the property market. With a number of high end developments in the progress around its vicinity and the soon to be completed National Palace. The key value of this commercial property is the value the development has brought to the affluent neighborhood of Sri Hartamas which now has easier access to retail and F&B outlets without having to venture into the congested Hartamas Commercial Centre.With the opening of the Taylor's University College branch in Plaza Damas, there has been an increase in demand for rental of apartment units available within the development and providing owners with a consistent pool of potential tenants. For those who choose to reside within Plaza Damas, the choices are almost limitless, with choices of apartment types ranging from studio apartments to 4 bedroom units. The Plaza Damas commercial center is definitely one of the properties to keep an eye out for if you are in the market for an apartment or commercial property. The value of the commercial properties within the Plaza Damas commercial center has also seen steady growth since the project was initially launched. Initially coined as the playground for the rich, within Plaza Damas you will find Beauty Saloons, Spas, designer furniture, clinic and more which are frequently visited by the affluent.