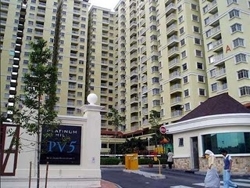 Platinum Hill PV5 was first launched in 2002 as part of the first phase of development in Taman Melati Utama, Setapak by Platinum Victory Development. In combination with Platinum Hill PV3, there are 950 units spread across six 17-storey blocks that were completed in 2005. Platinum Hill PV1, which refers to the shop-office block, was also launched about the same time. Platinum Hill PV5 is just few minutes walk away to many favourite conveniences.Situated over 32 acres of freehold land, Platinum Victory has sold off the first phase of its office blocks located in front of the condominium. With tenants like Old Town Kopitiam, Secret Recipe, 7-Eleven and Speed 99 supermarket, and many others, residents at Platinum Hill PV5 are pampered with all sorts of amenities.Taman Melati LRT station is just 5 minutes away from Platinum Hill PV5, while the MRR2 that links with the DUKE highway is just 10 minutes away. Commuters is very convenient to travel to the city center or even to Cheras, Ampang or Damansara in just 15 to 20 minutes.UTAR, Kolej Tunku Abdul Raman, Sayfol, Fairview and Sri Utama International Schools along with public primary and secondary schools are amongst the notable educational institutions that surround the area of Platinum Hill PV 5. Taman Melati Utama is surrounded by neighboring communities like Kampung Wira Jaya, Desa Melawati, Gombak Setia and Taman Bunga Raya.

Platinum Hill PV5 is situated in a very dense and highly populated area, but amenities are aplenty. From the local fire station to petrol stations, supermarkets, shopping centers, banks, post office, F&B outlets and educational institutions, one will lack nothing living in this area. Taman Melati Utama is fast being developed into an upper class neighborhood with the upcoming condominiums also by the same developer. Platinum Hill PV2 - fetching a whopping RM450,000 for a 1,500sf unit - is to be completed in 2013. Rental at PV5 has also increased. An unfurnished unit can fetch RM1,400 - RM1,500 per month, while a fully furnished unit RM1,800 - RM2,500 per month. The largest unit in the condo is a duplex penthouse, which has a built up of over about 2,600 sf, 7+1 bedrooms and 5 bathrooms. Most other units are standard 1,200+ sf. For about RM0.125 psf for maintenance, a lot of facilities are made available to the residents at this condo. There are plenty of shopping areas, hypermarkets like Carrefour, Giant, supermarkets and departmental stores like Jaya Jusco within the area to serve the large community there. Platinum Victory seems to be doing well in the sale of all its property launches within Taman Melati Utama and also Setapak Lake City - another large 140-acre mixed development.