Bangsar Trade Centre (extension of Plaza Pantai) is dubbed to become the next icon in Pantai. This integrated development is strategically located adjacent to the Federal Highway and has an LRT station (Kerinchi RapidKL LRT station) within the building itself. It is adjacent to Menara TM, Wisma Pantai, Wisma Goshen and Wisma Atlas. Bangsar Trade Centre consists of 6 blocks that comprise a total of 4 million sf. The development has 5 major components - corporate office tower, office tower, Soho Service Suites, retail podium and a convention hall. The Soho Service Suite has already been launched. It will be managed by the world renowned hospitality operator, Best Western Hotels. Best Western Hotels is the world largest hotel chain with over 4,000 hotels in 80 countries. The Soho comprises a 17-storey tower which is right next to Menara Telekom. Most units offered are studios with built-ups of 507 sf, 542 sf, 558 sf, 578 sf, 618 sf, 628 sf, 635 sf, 650 sf and 660 sf. And there is also 3-bedroom, with built-ups of 1,088 sf to 1,178 sf. The serviced suites tower at Bangsar Trade Centre is integrated with high-speed modern lifts, 24-hour security and roof top conference room that overlooks PJ and Bangsar neighborhoods. Early bird buyers are offered up to RM25,000 discount (and RM15,000 discount for the 2nd preview to buyers) and 3 years of Guaranteed Rental Return (GRR). The Corporate Tower consists of a 30-storey tower that offers Soho units with about 18 Soho units per floor. Each floor is served by 9 lifts. Each unit is entitled for the club house membership that allows residents to use the facilities provided that include business centre, gymnasium with sauna and Jacuzzi, conference rooms, launderette and sky lounge. The retail mall, also known as Bangsar Galleria, is also in the market for sale. Bangsar Galleria comprises over 100,000 sf of retail space that can fit over 200 units of wholesale fashion outlet. In addition, the retail mall will also host dining outlets and eateries. It will be connected to Menara TM and Bangsar South via link bridges. 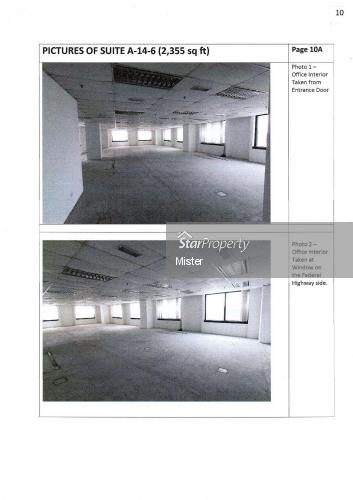 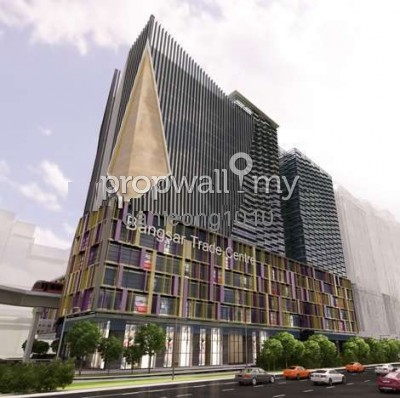 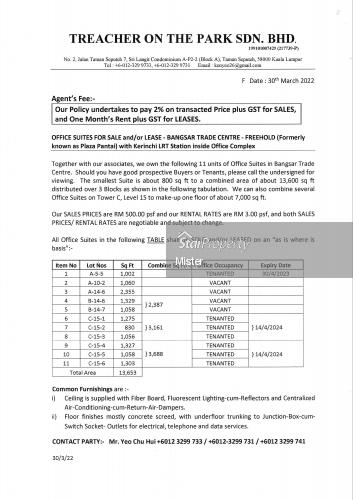