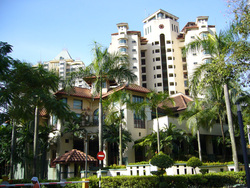 Mont Kiara Sophia is a high-end condominium developed by Sunrise. The developer is one of the many well known developers because of the quality materials used in their construction. Sunrise is also a developer in which many buyers have put trust in and have not regretted with the outcome of their projects. Overall, there are a total of eleven completed residential projects and still a few more under construction. One of Sunrise's oldest collections will be the Mont Kiara Sophia, which was completed back in 1997. It is amazing to see a senior building still under good maintenance with the potential to even fetch a handsome price for a unit. One very attractive feature of Mont Kiara Sophia is that it offers a very relaxing and quiet environment. This would be a suitable getaway from the busy and noisy town. The area also gives a resort-like feeling which is quite appealing to the young and old. Besides that, Mont Kiara Sophia also offers very good facilities such as the jogging track and the heated swimming pool. The large compound in this condominium also allows a jogging track to be built on the site. This saves the time of residence to drive out to the nearest stadium just for jogging. The heated swimming pool will be something Mont Kiara Sophia can boast about, because it is rare to find these types of pools in condominiums. Several shopping malls can be found within the vicinity of Mont Kiara Sophia. Plaza Mont Kiara can be reached by foot at around five to ten minutes which is about 600 m away. Hartamas Shopping Center is also not far off as it is just about 200 m away from Plaza Mont Kiara. So, your shopping needs for things will be well taken care of.

Location wise, Mont Kiara Sophia is near to Sprint Highway, which is directly connected to NKVE highway. The area is also easily accessible as it is not so secluded from main area of Mont Kiara. Located along Jalan Kiara 1, Mont Kiara International School is only about 200 m away from the condo. So, if you have a family with children and planning to move in to this area, you might want to consider sending them to this school. Of course if money is not a matter because most international schools can be costly. Other schools in the vicinity of Mont Kiara Sophia include Garden International School at about 700 m away, and also SMK Taman Sri Hartamas at about 1 km away. There are still other schools which are nearby, but they are located more than a kilometer away from Mont Kiara Sophia.Although the condo is more than 10 years old, Mont Kiara Sophia still have the ability to fetch a handsome subsale price. Initially it was launched at about RM200 to RM300 psf, but as of September 2014 the subsale price starts at RM710,000, and maybe even more depending on who the seller/agent is. One reason for the units being so expensive is probably the quality of the materials used during the construction. Besides the materials, the resort-like feeling of Mont Kiara Sophia also adds to its price. However, there is also a price to pay for its long lasting works. Residents are required to pay RM0.47 psf for maintenance fee. It may not be cheap for but it is worth every cent to own a nice place at Mont Kiara Sophia.Those who bought Mont Kiara Sophia at launched price definitely managed to earn something out of this property. As for now, this condominium will be more appropriate for staying instead of investment purposes. Partly because this property is already quite old and there are some units left which are vacant. Nobody would want to stay near a unit which is vacant as the value of the property will depreciate a lot.In terms of design, Mont Kiara Sophia looks like an exotic resort at the main entrance. This could be due to the landscaping of the area. The condominium offers a lot of greens in the area making it look more natural and exotic. There are a lot of plants along the vicinity of the condominium. Buyers should also note that Mont Kiara Sophia has also won many awards in terms of landscaping, probably because of its excellent maintenance of the 6.6 acres of land. The natural look was one of the factors which attracted many buyers / investors to purchase a unit during the launch. The two towers are painted with a very dull green which is not a very suitable color. It would be better if it was painted with a refreshing colors such as white or orange.