Kepong Central Condominium is a leasehold condominium developed by Mega Mall Development, located in the lively and bustling area of Kepong in Kuala Lumpur. It is strategically located at only 20 minutes away from the city centre of Kuala Lumpur, while other areas of importance such as Mont Kiara and Bangsar are also approximately 20 minutes away only. Kepong Central Condominium is a high rise that stands at 18 stories tall. It is a relatively high density condominium with a total of 648 units, in a single block. Sizes of these units range between 962 sf and 1,098 sf, with 3 bedrooms and 2 bathrooms, at reasonable prices of between RM250,000 and RM368,000 while units for auction start selling from RM190,000.Being completed in the year 2007, Kepong Central is a relatively matured condominium. As such, it is a fully occupied unit, and all units for sale now are either partially or fully furnished. As such, buyers can usually expect their new homes to already be furnished with built-in kitchen cabinets and light and fan fixtures at the very least.Residents of Kepong Central Condominium enjoy basic facilities, such as the resident swimming pool and the children's playground. Allocated to each unit is also a parking bay from the covered parking lot provided, as well as a 24-hour security team to ensure safety along with the CCTV surveillance system.Being located within the city limits, Kepong Central Condominium has access to many shopping centres with the closest being the Jusco Metro Prima Shopping Centre that is less than 10 minutes away. Local banking facilities are widely available, all within short driving distance or within a moderate walking distance. The closest medical centre is the Sungai Buloh Hospital, that is only 15 minutes away.Kepong Central Condominium is an aptly named high rise as it is strategically located on the main trunk road of Jalan Kuching. As such, residents have easy connectivity to Jalan Kepong and in turn the Duta - Ulu Kelang Expressway (DUKE). Public transportation is just as convenient for public transport users, with the Kepong Sentral KTM station being within extremely close walking distance.

Mega Mall Development is a small time developer that does not have much history in the development line. Besides Kepong Central Condominium, they have another project in Port Klang, named the Sun Plaza which is a mixed development consisting of shops, serviced apartments and shop lots.Mega Mall Development does not have a good reputation, as residents of Kepong Central Condominium have pitched many complaints against them with no results. Despite many complaints, rubbish is not collected, ceilings in corridors leak when raining causing floods, and gang fights happen frequently within the grounds despite the 24-hour security team and CCTV surveillance. The developer had also promised many other facilities such as rooftop gardens and such, but nothing has been materialised.As such, their new development, the Sun Plaza in Klang is not deemed to be a good investment despite being freehold property, as the developer is known to relegate on their promises. Kepong Central Condominium is in a deplorable state now, with many residents mourning the lack of response. It is by no way a safe place to live in with its walls cracking, and buyers will need to beware of this particular developer and their projects. 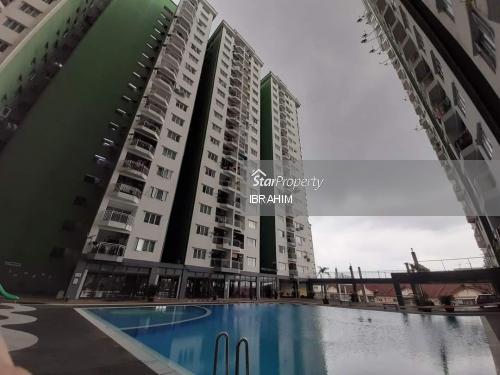