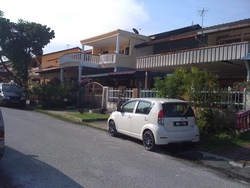 Jinjang Utara is a very large leasehold residential area located in the district of Jinjang in Kuala Lumpur. It is very well located within only 15 minutes of the city centre of Kuala Lumpur, while the Kuala Lumpur International Aiport (KLIA) is only 50 minutes away. Both Mont Kiara and Bangsar are only 15 minutes away, while Petaling Jaya is only 25 minutes away.Jinjang Utara is a neighbourhood that consists primarily of both single as well as double storey terrace houses, with a wide range of built-ups. The smallest built-up of these homes are only 800 sf, while the larger houses can range up to 2,800 sf. Most of the houses have between 2 and 5 bedrooms, with prices that range between RM420,000 and RM1,250,000.Jinjang Utara is a very old development, reaching back into the communist days when Malaysia was still under the rule of the British. As such, the homes in this area are generally sold partially furnished, with many coming with built-in kitchen cabinets as well as various odd bits of furniture. Many of the homes have also been renovated upon numerous times over the years.Jinjang Utara is primarily a very old housing development with no facilities offered. Its roads are generally quite narrow, although there is a playground as well as a football field close to the houses. Some of the houses have also been converted into mini marts, while outside the neighbourhood are a few odd rows of shophouses that offer restaurants and road side eatery stalls.The closest shopping mall to Jinjang Utara is Jaya Jusco, which is about 10 minutes away, halfway to Selayang. Opposite of it is the hypermarket Tesco, while nestled in the inner roads are a couple of daily morning wet markets. Schools are abundant in the area, while local banking facilities are also easily found scattered across the neighbourhood.Jinjang Utara is a fairly easily accessed housing development as more and more highways have been built to connect the area. The most notable trunk road that connects here is Jalan Ipoh, while the Duta - Ulu Kelang Expressway (DUKE) is mere minutes away. Access to the Middle Ring Road 2 (MRR2) is also very convenient with the access point being less than 5 minutes away.

Jinjang Utara is a very conveniently located housing development with many access roads via many highways and many trunk roads. However, depending on which route residents use to get home, they may get stuck in extremely heavy traffic congestion during peak hours. Usually the worst affected routes are from Jalan Ipoh, while the smoothest routes are via the Duta - Ulu Kelang Expressway (DUKE).Jinjang Utara is a very old housing development that used to be called "no-man's land" due to the massive and aggressive gangsterism that used to go on here. The majority of the population here are Chinese due to the British allocating the area to the Chinese population in history. The gangsterism issue has long since dissipated in history, although the majority of the population still consists of Chinese.Although it is very centrally located, Jinjang Utara does not hold much appeal in terms of investment; firstly because of its leasehold title, and secondly because the area still looks quite backwater. However, those who are looking for a permanent residence close to civilisation will find that the neighbourhood carries its own kind of charm, and that the houses here are fairly affordable.