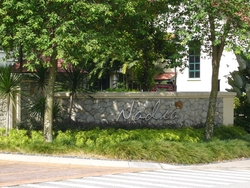 Nadia is a mixed residential development that consists of 2 and 3-storey linked houses (Nadia Parkhomes) and a condominium (Nadia Parkfront Condos). It is strategically located in the beautiful township of Desa ParkCity, Kuala Lumpur. Nadia is the first development, and also the first condominium among others in Desa ParkCity. Nadia Parkhomes is a new style of terrace houses with 6-acre of park and private garden within a gated and guarded community. It comprises of 165 units of linked houses. On the other hand, Nadia Parkfront Condos comprises of 246 condo units within two condominium towers, with built-up from 635 sf to 2,669 sf. It was completed in March 2006, and was launched after Nadia Parkhomes. Together, these two beautiful developments are sitting on 17-acre land in Desa ParkCIty. Nadia is part of the 473-acre freehold development of Desa ParkCity. There are a total of 25 neighborhoods, which each of them possesses own unique characteristic that makes them different from another. The entire development will comprise of a 45-acre mixed-use commercial belt, 2 business parks, a 43-acre central park, a clubhouse, a community center, schools and others.There are ample facilities available to cater residents of Nadia. Located in the heart of the township, there is The Waterfront, a commercial hub that houses a number of restaurants, cafes and also Max Value supermarket. Besides that, Nadia is also meters away from Central Park, a 43-acre park, which is designed for several recreational activities. There is also a community clubhouse that comprises swimming pools, F&B outlets, a gymnasium, tennis court and other recreational facilities. Plus, there will be an international school and hospital in the vicinity.In terms of accessibility, the township is neighboring Taman Tun Dr Ismail, Bandar Utama, Bandar Sri Damansara and Manjalara. It is nearby Lebuhraya Damansara-Puchong access that directs motorist to Sunway, Damansara and SPRINT Highway. Besides that, it is few kilometres away from Penchala Link Highway that leads to Mont Kiara, Sri Hartamas and Federal Highway. It is only 17 km away from Petronas Twin Towers and 5 km away from Bandar Utama.

Nadia is developed by Perdana ParkCity, a subsidiary of Sarawak-based timber company, Samling Group. The group bought the 473-acre of the part-quarry part-rubber land for RM200 millions, which is less than RM10 psf back then in 1999. Desa ParkCity residential developments are well accepted by the locals, and also gain growing interest by the expatriates. Some claimed that there are quite plenty of Frenches residing in the enclave, which explains why a French restaurant is open in the township. The developer claimed that owners have enjoyed consistent capital appreciation averaging 8% per annum from 2005 to 2008, and net annual yields as high as 12%.Even though the whole Desa ParkCity township is well planned and has exclusive feel, but once you take a foot off from the township you will feel lack of exclusivity driving around the Bandar Menjalara enclave. There is no public transportation offered in the township. There are only bus and taxi that one can rely on if he/she does not own vehicle. The nearest train is KTM Komuter in Kepong and Sungai Buloh.Back then before Desa ParkCity was launched, people doubted this whole development due to several reasons, including traffic jam at the U-turn along Lebuhraya Damansara-Puchong (LDP), Kepong is not considered as Kuala Lumpur, have to pay RM1.60 toll to get to Damansara, and an unknown developer. After the development was completed, most of these drawbacks were wrong which resulted the price to sky-rocket by above 20% immediately. Nadia Parkhomes was launched in June 2002, and the developer claimed that all units were sold out within three days of the launch. It was launch from RM400,000 per unit. After it was completed, the price hiked to about RM600,000. Most buyers were satisfied with the quality and workmanship delivered by the developer. Some said they have the feeling like living in a resort than just a link house. Besides that, they are also impressed with the landscape and security in the area. Also, the maintenance fee of Nadia Parkfront Condos was raised from RM0.18 psf to RM0.22 psf. The same fate was suffered by owners of Nadia Parkhomes, which the developer had increased the maintenance fee from RM0.15 psf to RM0.20 psf. It is afraid that the developer will continue rising the maintenance fee from time to time in the future.In January 2008, the developer launched The Northshore Gardens, an exclusive condominium development comprises of 40-storey tower that houses 274 units. It was priced from RM580,000 to RM3,500,000, at an average price of RM520 psf. The condominium is located in The Central Park, right in the heart of the 473-acre Desa ParkCity. It is scheduled to be completed in 2010. With this new development, it will surely elevate Nadia Parkfront Condos to at least RM520 psf, while The Northshore will escalate to around RM600 psf.If you intend to invest in Nadia Parkfront Condos, you should consider putting your money on the studio units to gain high rental yield. Studio units at this modern township are very limited. With upcoming development of Desa ParkCity town centre, the demand for these condos will be high. Besides Desa ParkCity, there are several other developments by other developers as well in the vicinity. These include Bayu Sri Bintang, a 4.5-acre guarded community that comprises of 26 units of semi-d's and 4 bungalows, launched between RM1.4 to RM2.5 million. In addition, Sunway City and its joint-venture partner, Syarikat Permodalan Kebangsaan has joined bandwagon via Sunway SPK Homes by developing Sunway SPK Damansara and Villa Manja. As within Desa ParkCity vicinity, the developer claimed that there will be about 7,278 residences in total comprising of 4,500 high-rise condominium units and the remaining are landed houses in another 8 years time. With upcoming several other new developments in Desa ParkCity itself scheduled by the developer, it is afraid that the area will be a high density and congested area. There are few amenities planned to be built in Desa ParkCity. The developer has signed a memorandum of understanding with Subang Jaya Medical Centre to design, build and lease a 250-bedroom hospital in Desa ParkCity in August 2007. The lease will be for 15 years with the option to renew for another 10 years. The hospital is expected to serve the residents by 2011. Besides that, there was another memorandum of understanding signed with Nord Anglia Education, a worldwide education specialist listed on the London Stock Exchange, to operate an international school in Desa ParkCity. Furthermore, Desa ParkCity's town centre will be launched in 2010. It will comprise shops, offices, serviced apartments, a hotel and a hospital, on a 40-acre land. Public transportation is a big drawback of this area. One can only rely on bus and taxi for public transportation. Thus, this area is only suitable for those who work in Mont Kiara and Desa Sri Hartamas area, as the location is quite far from other major commercial centers. It is not suitable for those who are work in Damansara area as there are plenty of good residential options nearby. Investment wise, it is already too late to gain big bucks from Nadia. Most initial buyers either have already cashed out large profit from their investment, or are residing in the house as being tempted to the exclusivity feel. The price has escalated from RM165 psf back then in 2002, to RM355 psf. Mind you that Amelia was launched from RM800,000 to RM1,000,000 in 2006. Thus, there is still potential that the price will continue to escalate. Perhaps, the price will decrease a little bit, and then it will be the perfect time to jump into this impressive development. 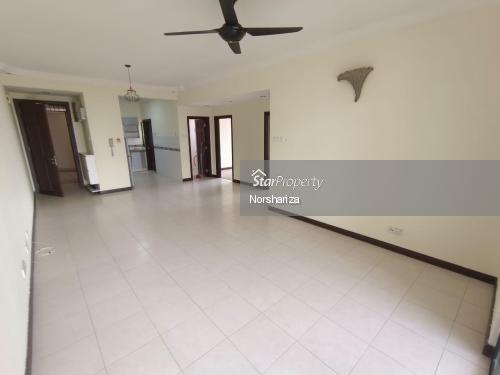